We consistently adapt our organization, our operating principles and our cooperation to ensure they create the best working environment to deliver processes and information technology as a backbone for all FUNKE media group’s products and services. At FUNKE Technology we have created a work climate where mistakes are understood to be a chance for improvement. We live in a culture where we don’t resist change, but rather consider it as an opportunity to win a new game with new rules.

Our teams bear the primary responsibility for ensuring quality and managing deadlines. A team with common objectives does not require a hierarchy. That is why we practice collaborative leadership, take responsibility together and develop the best solution as a team. We live in a culture where we work openly and respectfully with one another and thus create a pleasant work climate.

We encourage creative thinking with our agile team structures while using the most varied agile methods to reach our objectives and develop our own best way of working together: Free of dogmatic methods, supplemented by reflection and our team culture. We allow ourselves to be guided by innovation. With our own technology incubator, we research and evaluate new solutions and technologies based on technical proof of concepts and share our experiences with the entire team.

We work respectfully on equal terms with our partners, but we also argue constructively and confidently for the best solution for FUNKE.

Our centers of excellence

these are our disciplines

Good software applications are characterized by one central feature: They support users ideally in performing their tasks more efficiently, creatively and successfully. The creation of good applications is not only based on the mastery of technological essentials, but above all also on the understanding of business processes, users’ work methods and their needs.

The Business Consulting team consults our partners from different departments and jointly develops individual solutions which derive maximal benefits from existing or new technologies for FUNKE in general and users in particular. As business consultants we know the market and the implemented technologies, thus being able to optimally consult our partners in commercial and technological matters. We accompany them from the initial idea to the implemented solution and take care of transparency and quality during the whole process.

In a steadily changing market, agile heads, who keep track of multiple projects and objectives, are needed. They can be found in Project Management. Our project managers and agile masters accompany our teams as well as our partners in the coordination of project proposals and take care of an efficient and especially also agile implementation. Using state-of-the-art methods, the project management team provides appropriate methods and frameworks and constantly refines them to be able to offer the best solution possible. Furthermore, the portfolio management for the entire FUNKE group is a central component of our daily business. Clearly focusing on the objectives and strategies of FUNKE, our project management is therefore an important driver of the media group.

We understood that a system landscape is more than the sum of its parts. That’s why our System Engineering considers the overall cohesion of the heterogeneous diversity of digital facets and coordinates a variety of IT disciplines in order to accomplish an ideal system integration of applications in complex hardware surroundings in combination with cloud landscapes. Using intelligent monitoring methods, we permanently analyze and organize our IT landscape’s processes, thereby helping to develop an efficient system architecture for the digital and print products of the FUNKE media group.

The Core Platform Engineering area comprises the competences of construction and operation of the IT infrastructure. It ensures safe hosting and our own IT solutions with matching performance and availability. We take care of the conceptual correctness of these resources, especially regarding technical IT consultation and training as well as data security and data privacy. We develop and improve strategies, provide the required frameworks, techniques, standards, guidelines, tools, etc. thus ensuring that they can be deployed for DevOps quickly and easily. A hybrid cloud strategy creates flexible and safe portfolios of IT resources and services, which are orchestrated by management and automation software. These resources and services can be scaled automatically and the allocation can be managed dynamically.

In the scope of Application Development, our focus is on the development of software modules as a complement to an existing software system and the implementation of single components without full knowledge of the adjacent software layers and without significant influence on its architecture. It is about the extension and improvement of applications within the planned framework. In addition, major components of the application development are the development of interfaces between existing systems, the provisioning or consumption of (web)services for and from third parties as well as the entire field of scripting, mainly in operation close to the system but also cloud-driven. Thus, profound knowledge of the application’s ecosystem and related processes is required. Depending on the application, the operating responsibility within the context of the “you build it, you run it” DevOps approach is possible or required.

Without the knowledge of correct administration, configuration and further development of our various applications, we cannot do our job. Many of our daily questions and challenges can only be solved by finding and asking the correct application experts. This very competence that reflects as great a range as the variety of our applications itself, is found in Application Engineering. Application Engineering has its focus in the customizing of applications, tools and processes important to our partners. We react to changes in the life cycle of applications as well as changing demands from our partners. During the whole application development cycle, we support processes for application design, analysis, development, and testing. An application engineer coordinates and supports the development of a product by focusing on the user’s point of view and the technical aspects while customizing. Our objective is to achieve the best possible cooperation between our applications within the framework of our business processes.

IT Engineering includes the provision of an up-to-date, basic IT infrastructure as well as the adequate support for all software applications and technical equipment. In this context, we rely on professional software solutions and innovations in the area of digital communication and knowledge transfer. Our support team is always available for our partners, in person, on the telephone or in written form and ensures a very high service quality, allowing a high first fix rate, by providing skilled IT know how on the one hand and understanding, empathetic communication on the other hand.

WE ARE WORKING ON THESE PROJECT TOPICS 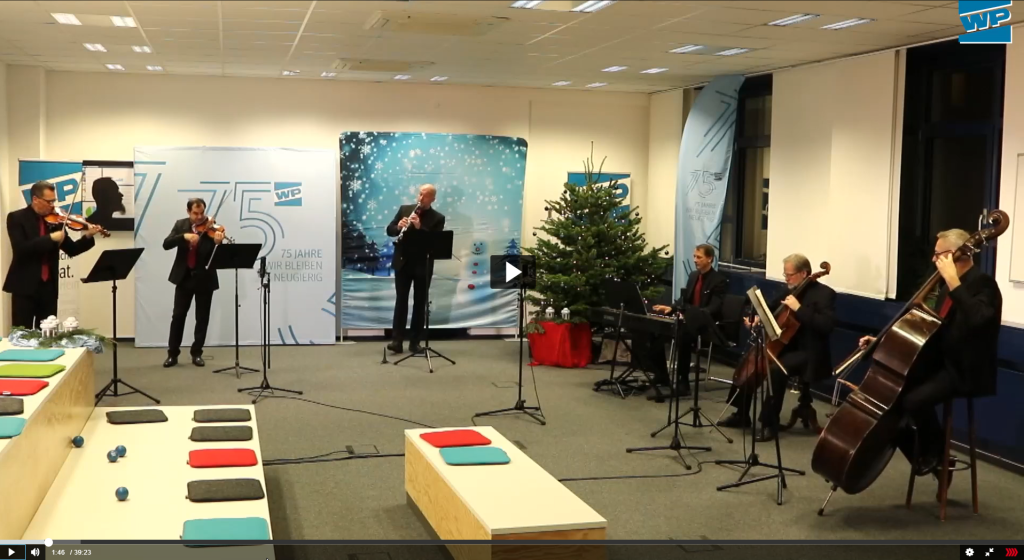 Innovation and agility are not only important to us, but they have also become a fundamental part of our daily working life. One project that has combined these two elements like no other is the project “Streaming of Live-Events”. Without the lengthy bureaucratic red tape of a classic project, our then Head of Strategic Technology Innovation Tim (since April CISO – Chief Information Security Officer), recognized the trend of streaming, once again fueled by Corona, and brought it into play as a lucrative product option for our media group. After fulfilling the original requirement of the management and corporate communications to reach many employees through streaming, further usage potentials were quickly discovered and used for our brands. For example, numerous people interested in cooking were able to comfortably participate in live cooking events of the EAT CLUB Hamburg, readers of Bild der Frau were able to participate in talk formats with Jens Spahn and other ministers, or selected readers of the Hamburger Abendblatt were able to participate in a wine tasting from the comfort of their own homes. The recording of the classic WP Christmas concert also remains a fond and vivid memory of our innovator Tim, as it was able to bring a very special Christmas atmosphere into the living rooms after a long event break due to corona (see picture).

On the IT side, we distinguish between 3 different formats: pure recordings, live streaming events with interactive chat, as well as entire hybrid conferences that live from the exchange between as well as contributions from different participants at different locations. On the software side, we rely on MS-Teams, which makes all screen content accessible to all participants via the screen-sharing option, in combination with the recorder software OBS, via which a professional recording of the Teams conference can be realized. For all formats, we also provide equipment, which has been professionalized in the course of the project, in the form of a green screen, computer, cabling, video and, if required, audio mixing console (see picture). In addition, FUNKE Technology continues not only to act as a consultant for the above-mentioned event formats, but also provides targeted training for our photo, video and brand units so that they can carry out the events autonomously in the future. FUNKE Technology then has a pure backup function, which can now even be realized remotely. Another highlight of the project is the resulting production studio in our media house in Essen, which is now available to the entire FUNKE. So, it remains exciting to see what new formats and possibilities will develop alongside the digital events that are now ongoing.

Our IT employees report

Statements from our team

Become part of our team

You will find all vacancies in our Recruitment Portal. Feel free to have a look and send us your application right away. 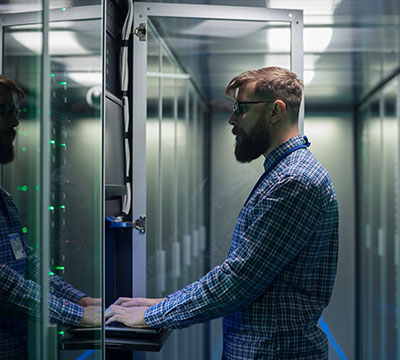 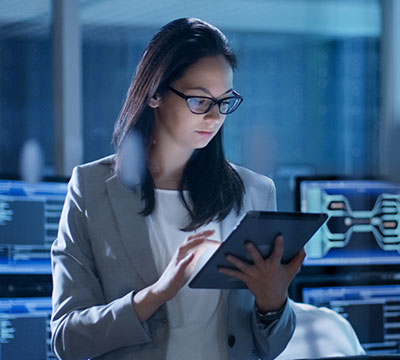 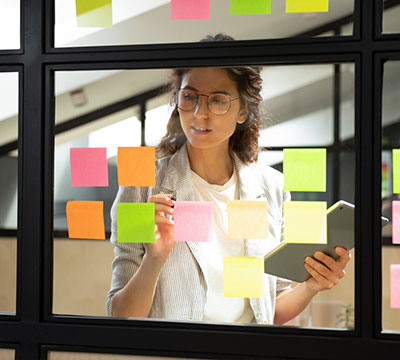 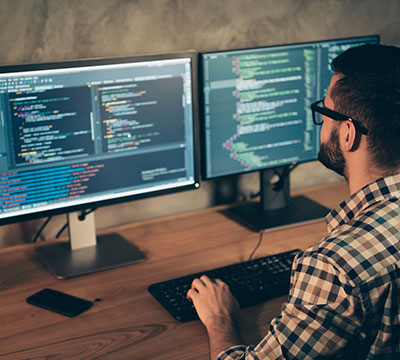